This is typically the time of year when columnists, pundits, and bloggers look back at the past year, and ahead to what the next one may bring. Assuming the planet will not end altogether on December 21st, here’s my retrospective and glimpse forward for the printing industry.

For some, the Mayan apocalypse may actually be welcome. Popular opinion places print (erroneously) on the endangered list. Many things we traditionally associate with print, like newspapers and ad inserts, are in decline, at least in North America and Europe. Companies associated with such things are also struggling mostly with each other for what they see as a dwindling food supply, so to speak. The traditional business of print is under extreme duress, surviving by larger companies assimilating smaller ones, or simply filing for bankruptcy. 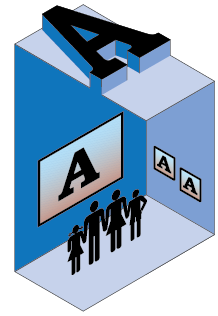 However, believe it or not, this is not a doomsday scenario. Printing companies and once-profitable print niches may fail, but print itself is a medium that will survive and even thrive for the foreseeable future.

First, lets look at the obvious. Packaging alone is a huge growth market, totally immune from digital. In the signage market, print does have competition from digital, but the cost and supply chain variance will insure the health of the print side of things for a long while. Both of these niches, if something so large can be called that, have enormous technical and logistical challenges especially as more general commercial printers try to compete with existing specialists but the demand is huge, and growing.

Second, we should never discount the growth potential of more traditional forms of print, like business collateral, direct mail, catalogs, and even publications like books, magazines, and newspapers. To be sure, the days of super-high-volume offset work are passing, but there is still an intrinsic value to using a printed piece in lieu of a digital screen.[1] As long as digital-variable-on-demand printing remains viable,[2] then the medium itself will thrive.

What needs to change is not print, per se, but the business values of those who provide the service. Printing is no longer a simple industry offering a predictable, high-quality, manufactured product at a competitive price. Instead, printing is a complex service industry, meeting a wide spectrum of needs and, ideally, creating a complex mutual partnership.

At the risk of over-using the example, lets think about Apples iconic Think Different campaign.[3] What did it do for the mundane world of computers that a similar outlook could do for a 550-year-old industry, steeped in old-school manufacturing notions?

At the root of Apples re-invention of computing was the user experience. The goal was to capitalize on the ah-ha moment that accompanied a consumers first interaction with the iPod, the iPhone, or the iPad. None of those devices was truly original, but users experienced them as Different in a strongly positive way.

Maybe the print world needs the Jobsian hubris and fanaticism that has made Apple rightly or wrongly the thought leader it now is. Attitude alone wont cut it, however. True invention must equal (at least) the arrogance of those who think print is still great.

The next great idea probably a hybrid of print and other media can’t be buried in a corporate culture stuck in the 1950s. Because printing serves human needs, and because humans are infinitely complex, it follows that there are an almost infinite number of possible printing innovations in our future. The only question is whether different printing will come from today’s printing companies, or from the next Apple of the print/mobile/whatever world.

[2] Industry thought leaders have predicted that the ever-increasing efficiency and quality of digital print approaching and eventually exceeding that of offset will result in a tipping point, possibly before 2020, where digital will be the preferred approach for nearly all printing applications.

[3] No, it shouldn’t have been, Think Differently. The phrase was not about how we think, but about what we should be thinking namely, the concept of Different, and the products that have that distinction.