Elsewhere in this space, Ive written about the environmental misconceptions surrounding print and paper. As it turns out, the print medium is potentially[1] the most sustainable and least problematic when it comes to energy consumption and carbon emissions. However, it turns out that paper is not only benign environmentally, but it is also a potential source of energy.

Paper mills already take advantage of this, of course. Since only part of the tree is used for the primary product (paper or other forestry-related manufacturing), the excess wood slash is frequently burned instead of coal to produce power for the plant. This produces somewhat fewer carbon emissions than coal, and in theory reduces the amount of uncontrolled waste burning in logging areas. By itself, however, this is not a big deal, environmentally.

A bigger deal is one of the byproducts of paper manufacturing. When mills use a chemical process to convert wood chips into fiber for papermaking, they end up with a nasty-looking goop called black liquor about seven tons of it for every ton of pulp. This residue, as it turns out, contains about half the energy content of the wood used to create it. Mills have been recovering and using black liquor as fuel to create electricity and steam for decades, rather than dumping the toxic material into the water. 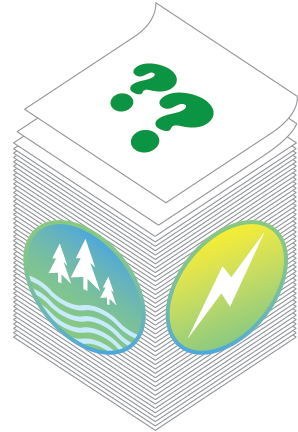 The fact that paper mills use this byproduct to lower their energy bill is not all that remarkable, but there’s more.

More recently, biofuel research has made significant progress with black liquor, creating a range of renewable fuels like synthetic diesel and dimethyl ether (DME) methanol. The latter, according to researchers at the new Chemrec plant in Sweden, has a very high potential as an alternative fuel. DME from forest residues through black liquor gasification has been proven to be the most energy- and cost-efficient amongst the second generation biofuels, according to CEO Jonas Rudberg. He goes on to say that the technology gives the pulp industry globally a possibility to strengthen its profitability remarkably and contribute to the reduction of greenhouse gases.[2]

It will be a while before this becomes a practical component of an energy strategy. Industry and government[3] tend to be slow movers on things like this. Be that as it may, alternative energy is a fascinating new reason to appreciate printand the peculiar medium on which it depends.

[1] We can still mess things up, of course. Sound practices in sustainable forestry, water use, manufacturing, waste handling, and recycling are business decisions or political ones that are not yet universal.

[3] Black liquor is less problematic than corn as a biofuel source, but corn-based ethanol has a formidable lobbying presence. I’m just saying.